A new spade design can stop users having to bend while digging and provides them with more power by being up to a third longer than standard tools. It was created by retired aerospace design engineer Paul Clements, who came up with the idea while trying to design a better trowel for a friend who uses a wheelchair.

Prototypes of the spade were tested by many users including a head gardener of a large estate who couldn’t bend to use a conventional tool because of a back sprain but used this version with ease. Paul said: “He was so impressed he said he’d equip all his staff with it if it were retailed.

“This spade is not a conventional spade with a mechanism added. That is the obvious design that has always been suggested. The problem with that design is that the mechanism has to be added to the shaft which, in turn, restricts the width of the mechanism so it can never be strong enough to cope with the loads imposed.

“For this spade the mechanism was designed first and the spade added afterwards. The mechanism is as wide as the blade so it can cope with as much load as can be applied to the blade and it does not impede the foot which a central mechanism will do. It’s stronger and more practical.”

Despite getting positive feedback from all his reviewers, Paul is still struggling to find a manufacturer to take on his design. He added: “A spade was recently found in the UK and dated to 1750BC. Apart from using metal instead of wood, the design hasn’t altered in nearly 4000 years, maybe even longer. That’s a ridiculous situation. This new spade may be a simple item, not high tech and glamorous, but recent research proving the risk of significant injury from digging and the need to minimise bending shows it has the capability of doing an immense amount of good.” 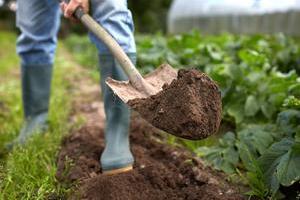